An online talk session organized by Delhi University’s Ramanujan college was called off just a few minutes before it was about to happen. The college administration was allegedly ‘uncomfortable’ with the mention of farmer’s protest in the title.

The talk was scheduled for 11th February at 5 pm. The speaker was scholar Sumail Sidhu Singh and the talk was titled ‘Baba Farid to Singhu Border.’ The topic of discussion was ‘The Making Of Punjabi Radical Tradition.’ The event was organized by the history society of Ramanujan college- Sanskriti. 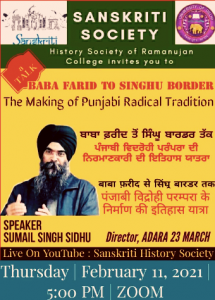 According to The Wire, Sumail Singh Sidhu said– “The understanding that I got was that the title of the talk did not go well with the administration, because it indicates that the talk would cover the ongoing farmers’ protest at Delhi’s borders,”

The talk would’ve largely covered the history and evolution of Punjabi language and how it lent itself to Punjabi radical tradition. However, this did not stop the administration from cancelling the session. The speaker was informed about this cancellation only 5 minutes before the session was about to start.

Sidhu further added- “Talking about the cultural history is no crime. And such a move should not be taken lying down. To raise the vernacular and everyday Punjabi language to this level of conceptualisation has been a great radical task. It has empowered the language. The talk was supposed to be an academic exercise for students of history as well as others who were interested in it,”

The teachers and students looking forward to attending the talk were disappointed. However, the principal of Ramanujan college, S.P. Agarwal, said that the talk had to be cancelled due to some technical difficulties that arose. This was a problem as the session was to happen on zoom and live-streamed on YouTube.

The principal said- “The technical wing of the organising team will be able to tell. They have organised it and they only cancelled it; I don’t know much about it.”

The speaker, Sumail Sidhu, strongly disagreed with this story. Many people were just waiting to join the call, they didn’t get wind of any technical difficulties. People had taken off from work to attend the day, including a couple from the UK. Students were excited about the talk and I had also prepared for weeks,” he said.