Mr Priyank Kanoogo (Hon’ble Chairperson National Commission for Protection of Child Rights) inaugurated the short-animated film on World Child Rights Day. Mr Priyank Kanoogo shared his valuable thoughts saying that he had congratulated Ms Megha Bhatia (founder of Our Voix) and Kavita Ma’am (Sr. VP, CSR Banswara Ltd.) for their great endeavour to prevent child sexual abuse. He laid stress on the lifelong impact of the heinous crime. He also added that it would help in sensitization of present as well as the future of children.”

The best part of the short-animated movie is that it is available in sign language as well. 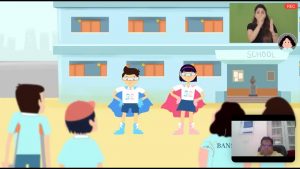 Humare Super buddies Humare Rakshak, people from 8+ states joined (Punjab, Haryana, UP, Karnataka, Tripura, Maharashtra, Delhi, Orissa, and even from London). The participants took a keen interest in the venture. The comment section was flooded with positive reviews quoting words like “Very Informative,”
“Buddy ke buddy Super buddy aa Jao” was a common slogan that was being typed in the union. A very beautiful comment was made when a child said: “Never stay quiet thinking about reputation.”

There was a set of 4 short animated films.
The first film spread awareness about “THE POWERS” by our Super Buddies. It describes powers namely – 1. Our body is our power. Even our private parts. We have right over them. The lips, hips, and part between our legs is our private area 2. The power of safe touch and unsafe touch can be differentiated. Safe touch makes us comfortable and Unsafe touch makes us uncomfortable or sad. The “Trust” that we should have on our parents and teachers. Sexual abuse can take place without touching also 3. The third power is our voice to say NO. It encourages parents to report the crime by thinking beyond the shackles of reputation. It is shown how complaint against Biren Uncle and Sujata Aunty (short animated movie characters) was made. 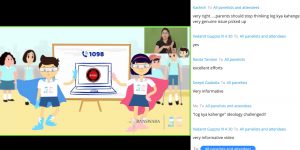 Second Movie: Encourages parents and teachers to step forward to break the silence. The awareness about the confidentiality that is being maintained while lodging complaints. The identity, name of the school is kept secret. There can be a punishment for 6 months if the complaint is not lodged.

Third Movie: The movie explains the early signs which can help teachers and adults to identify sexual abuse such as aggression, inability to sit, staying alone, and depressed.

Fourth Movie: It explains various self-defence techniques we can opt while being abused.
These movies are different because they are available in sign language. These short films are made by taking 100 + recommendations received from 120+stakeholders in India from 11+states and individuals from the United Kingdom to ensure a culturally diverse perspective. People from different fields such as doctors, lawyers, consultants, students joined the screening of the animated short movie.

The event included the perspective of a 15-year-old child also, Miss Mannat Sawhney, a student from Sanskriti School expressed – “She shared her perspective as a child saying – Proper Sex Education should be included in the curriculum.” Make Bachpan Safe for all. She shared her views on the short-animated movie saying “Our Voice coming together for the protection of children in a child-friendly way.” She also added that it would help the children to identify the abuser before it goes far. It is ventured to facilitate the prevention of child sexual abuse. In the end, she added, “Let us make it big and climb the slope to make bachpan safe.” 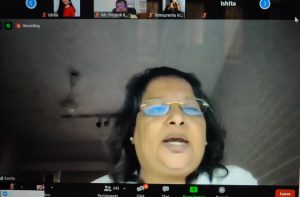 Ms. Megha Bhatia shared her valuable thoughts “She is grateful to Kavita Ma’am for believing in the vision of together making childhood safe.” “She also expressed that she strongly believes that children should not be just seen but heard too. Do you think children have a voice? “Today, we are not launching not just movies, but a revolution that children should be made aware of their rights over their body.” Let us raise a voice for the present and future of our children.

Kavita Ma’am, Sr VP CSR of Banswara Syntex Ltd also enlightened with her views saying – “She believes that people from big corporations should come forward and contribute to this cause to make a bigger impact. She feels that this is important for every child & we should raise our voice against it.”

It is an eye-opening event for students, children, teachers to prevent the abuse. The event was a catalyst change in the mindset and breaking the barrier of the social stigma. It covered information for all aspects of child sexual abuse about how teachers, parents, students, and everyone can come and stand against this evil in unity.

(Press Release from Our Voix in collaboration with Banswara Syntx Ltd.)

Also read: CHILDREN OF COVID WARRIORS WHO DIED TO GET MBBS & BDS RESERVATION

Culminating May with the Glossary of Ageism