There’s a hole on the side of the boat, that hole is never going to be fixed and you can’t get a new boat. This is your boat, and what you have to do is bail water out faster than it’s coming in. I have faith, it’s hard to declare these days but I really do. Everything bad with the world is like that hole in the boat and the best we can do is bail the water out, whether it’s standing up for what we believe or just doing the right thing. Girl Up, since its inception in 2012, has tried to do just that.

If you don’t know, Girl Up is a United Nations movement to advance girls’ skills, rights, and opportunities to be future leaders. And their motto is “When girls rise, we all rise.”

In times as volatile as today, women need a space, a community where they can say they belong. Delhi’s Girl Up Empower aims to do just that. Started by Riya Mathur, an ex-student of Gargi College, and now led by Soumya Nayyar, the club has fostered great impact through its campaigns in the past year and a half. Change doesn’t just happen. It is created through meticulous toil and these young girls are working tirelessly to do just that in the hopes of a more equitable society.

Passionate to do some good reporting and making sure the boat stays afloat, I contacted the Girl Up Empower Team. And they were kind enough to give me some time. Here is that interview. For purposes of ease of reading, the names of Riya Mathur and Soumya Nayyar have been shortened to their initials RM and SN respectively.

First of all, there are so many Girl Up clubs today. What makes Girl Up Empower club different?

RM: Firstly, when I started Girl Up Empower in March 2020, Girl Up clubs were relatively new. At least to me. There was Girl Up India and Girl Up Delhi Coalition, which overlooked the bigger picture. Not that there weren’t local Girl Up clubs but they were fewer than there are now. So ever since college, I have been the kind of person who likes to explore and learn.

To me Girl, Up Empower has always been about acknowledging our privilege and extending that. We believe that if we give the right platform to people and with the right resources, a lot of people can achieve much more than they think they can. Apart from that, it’s unlike any other club because it is personal. There is a personal touch to our campaigns, the way our team is structured and functions. Last year, there were so many different people from different places and backgrounds, and they had so much to offer. We are always learning from each other and there is no hierarchy per se. It’s all about teamwork and community values for us. Our approach is also in touch and connected with our audience.

Why do you think girls’ leadership is so important for our world?

RM: I am glad that there is still so much conversation and growth in terms of gender equality. There has been much development in that field but we still have a long way to go and that gap can only be bridged if we start taking charge and initiatives. There is so much appropriation and internalized misogyny and to get over these barriers, we as women leaders have to take leadership seriously. Being in positions of power, women will finally have the chance to make valuable changes. Our platform provides women with an opportunity to become leaders. But oftentimes we see so many girls struggle to come forward with stories. We first hand saw female members leave Girl Up Empower because their families weren’t “okay” with it. So slowly and steadily, more female leaders will be able to bring some long-lasting changes.

SN: I wanted to add that girl leadership is just one branch of feminism for me. Presently in our country feminism is no longer a choice- it’s the need of the hour. There is no other way around. But talking about female leadership, when I see a male in the hierarchy, there are chances he might not understand my issues. But if there are more girl leaders in organizations, it’ll be more inclusive.

What are some of the most pressing issues facing girls in our country?

SN: There are a lot. [laughs] The list won’t even end. For me, when I joined Girl Up, I learnt that there were so many things that were wrong like manterrupting (man interrupting), mansplaining and catcalling. And then there are so many things I did know about like problems of equal pay, misogyny and suppression of women within families. How can women become leaders if they aren’t even seen as equal to the brother in their household? All in all, the equal opportunity scale is broken.

RM: Even in just feminism, there is so much misinformation. People have very wrong ideas about what feminism stands for and so yes, that is a prevailing issue in front of us.

In terms of getting involved with the girls and women’s rights movement, were you influenced by anyone in particular?

RM: That would be my mother to be very candid. I think the reason why I do what I do when it comes to women’s rights is her. From where she was to come to where we are today, just in one generation there has been so much progress. I was inspired by the values she holds and the difficulties she’s faced that I haven’t.

Tell me about some of your past projects.

RM: One of our earlier campaigns was about body positivity and we received so many impactful entries. The people who shared their stories later came to us and told us that they feel light to have this weight lifted off of them. And for us to be able to provide them with that space encouraged us that we were doing the right thing and were on the path to making some real impact. 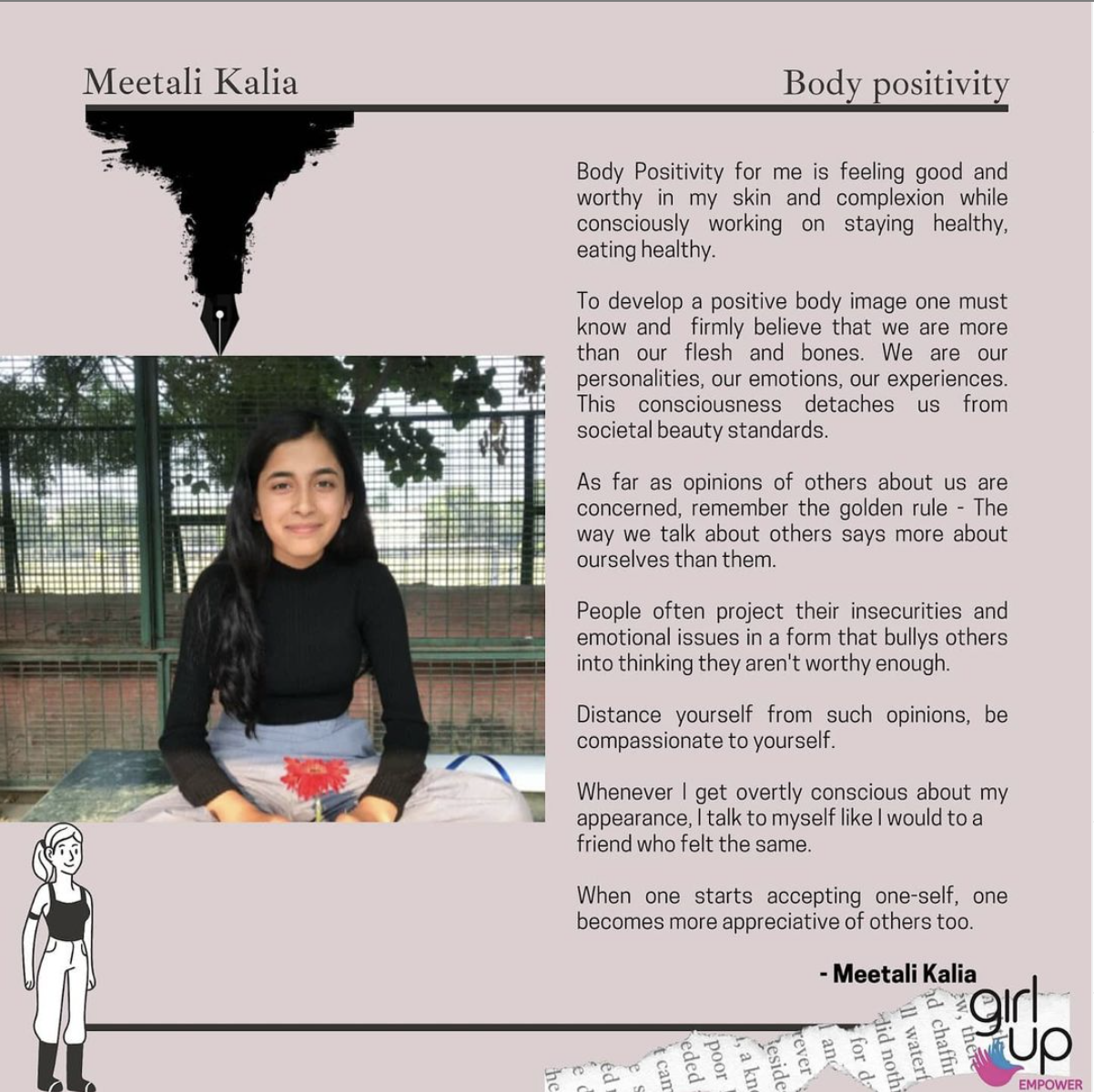 Another campaign was the “De-Labelling Campaign” which we think empowered people to be themselves. Society has given us these labels and so we wanted our campaign to focus on bringing individuals back into individuality. 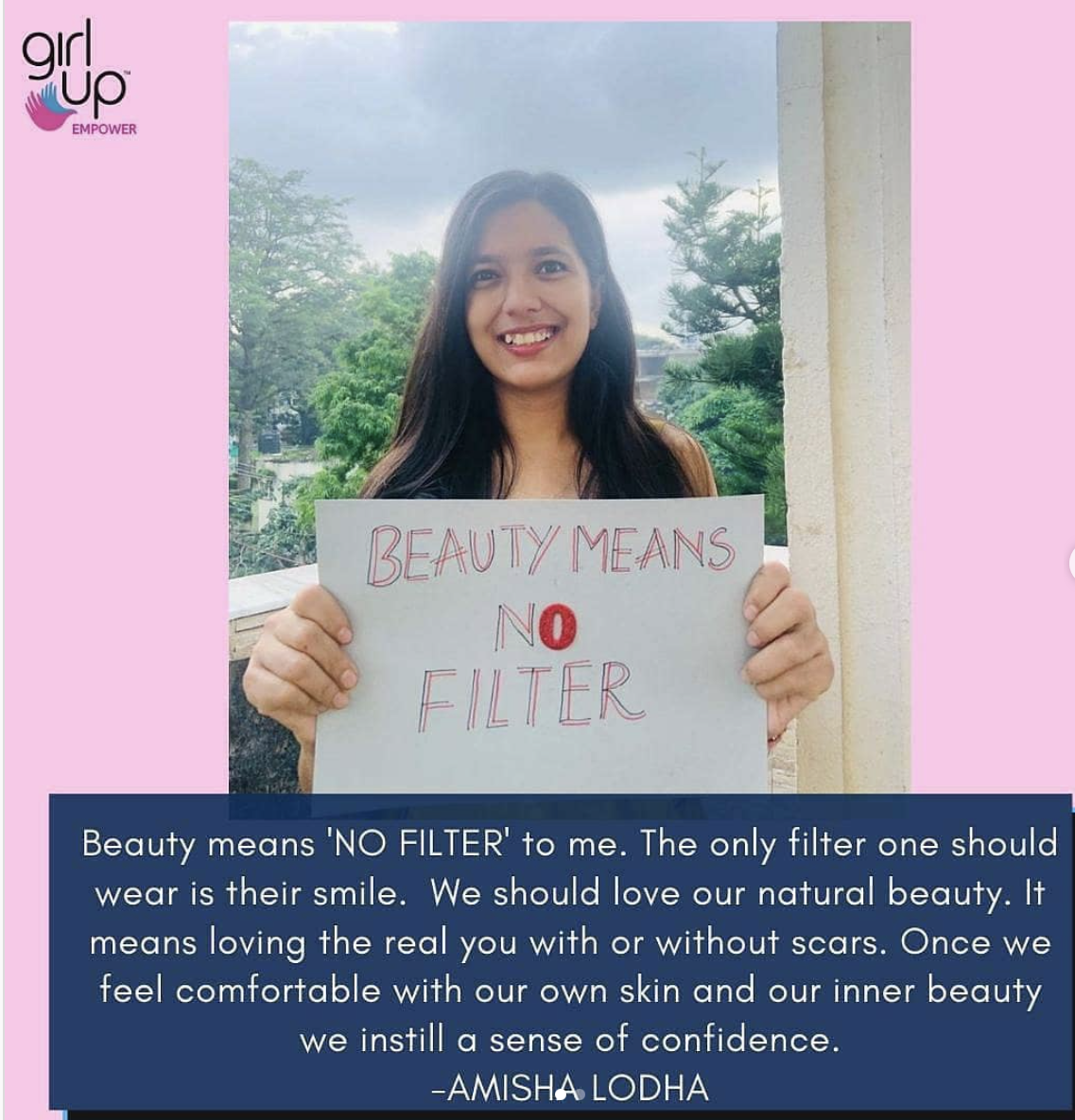 How do you see the future of Girl Up Empower? What are the campaigns you want to take up?

SN: This year we have started on a clean slate. We had many successful campaigns like Body Positivity and De-Labelling. But this year we are looking to go forward with some on-ground campaigns. The fact that we aren’t all in Delhi is not going to hold us back. We’ll take the fact that we are segregated and use it to run smaller on-ground campaigns across the country especially in rural areas. For our social media campaigns, we wanted to take a more unique stand on all the issues faced by the female community.

If you could have dinner with anyone dead or alive, fictional or non-fictional, who would it be and why?

SN: Ankush Bahuguna. [laughs] Not that I should judge him through his stories but he seems like an open-minded person. He is one feminist icon that more men should look up to. I’d love to know him more and yes, he is so cute.

If you had a loudspeaker and you were at the top of a building, what would you shout?

RM: Mental Health isn’t for you to capitalize on.

Minor grammatical edits were made.

Girl Up Empower has successfully worked with over 100 members since its inception in March of 2020. They concluded their recruitment for the 2021-22 session in July of this year, with a selection of 40 members from over 200 applicants. The recruitment process usually entails an application, an interview round and finally a task submission. Those interested can apply for one of their six constituent teams – Logistics and Campaign, PR and Marketing, Social Media Management, Research and Content, Creative/Graphic Designing, and Content Creation. Keep an eye out for recruitment notices for the next session on their Instagram account.

Stay updated with their content here. You can get in touch with them at girlupempower2021@gmail.com.