My fondest memory of writing letters is them not reaching the intended. Last year, I posted 6 letters to my 6 friends on February 13th, 2020. Two of them were addressed to my friends who I came across on Instagram. The weirdest part is those letters reached Chennai from Delhi but not Gujarat. I was wondering how this postal service even works. In the end, three of them received letters. I remember their excited voices over the phone as one of them had called while I was sitting in the amphitheatre of my college.

Even to this day, I wonder where those other letters went. Maybe lost due to Covid, or maybe someday they finally find their destination. However, I am grateful that the India Post did their due diligence with those three at least. Lately, I find my bonds drifting due to an overwhelming first year. But I also find them evolve into different, more intimate bonds that remain the same even if we don’t talk for months.

I guess letters have a way of conveying our messages with our emotions in a way that texts can never really deliver. Whenever I tell people that I still write letters, I get mixed reactions. They really amaze me because there are so many people who want to receive letters but really few who are willing to write one.

Sometimes people say that they find it difficult to express themselves in words. But it only takes a small paragraph, or just a few statements to tell your loved ones what you exactly feel. Leave the rest to Daakiya’s stunning photography and beautiful postcards. Speaking of, let me introduce you to this venture that might just bridge the gap to your lettering dreams.

The team includes four LSR students – Athira, Shilpi, Sakshi and Avidha. The former is a third-year student from Lady Shri Ram College for Women while the latter three are graduates from the same. Being part of the college photography team made them really good friends. Their ideas had humble beginnings. But after much brainstorming and a realization of their common love for both photography and handwritten notes, Daakiya came into being. 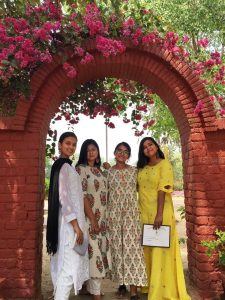 The team has a minimalistic website and an aesthetic Instagram account. Every one of their posts seems to warm my heart, (something people in their reviews have kindly pointed out too). The venture appeals to all old souls and revives vintage postcard writing. So read the interview to know more about Daakiya, their passion for what they do and of course their love for letters! 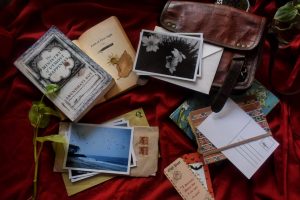 Ques. – What does the term “letter” remind you of?

Sakshi: It is something we don’t write as often as our parents used to. Nonetheless, I did write some when I was young. It used to be this piece of writing where I could express everything. To find a paper and a pen and also decorating a letter was something that excited me a lot as a child.

Avidha: The word that comes to my mind is effort. Writing a letter and the logistics applied to it take a lot of effort and we won’t do it unless it is someone special. It is these qualities of empathy and cares for people you love. Of course, sending a meme has become equivalent to caring now. But honestly, it can never replace a letter.

Athira: .. you know that added extra care when you know you are giving extra time .. It takes a second to send something like a meme. So much thought and time goes into a letter, unlike any virtual communication.

To answer your question, what comes to mind is my brother. During my teen years, he was at the Indian Naval Academy. I would miss him a lot and I would tell him this when he called. But due to the academy’s strict rules, he couldn’t call much. So what he did was he started writing letters. He would write small paragraphs when he got time. Then he would collect them and put them in an envelope addressed to us. In that envelope, there used to be 2-3 pages just for me, because of which I started writing to him and then my cousin. I just loved getting his letters. This is why letters have always been close to my heart. 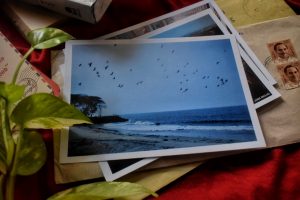 Ques. – What is your fondest memory of writing a letter?

Sakshi: For me, it is a tradition that I and one of my best friends have, of exchanging letters on our birthday. When we were in Delhi it was easier, but this time she had to send it virtually.

Shilpi: The letters to and from Grandpa. The telephone existed, the mobile services were operating yet he chose to write letters all the way to Delhi. He would describe his day, about the things around and ask about our studies.

His letters would always end with a ray of hope and encouragement. I still remember the zeal to reply to his letters, go to the post office to paste a stamp and drop them in the letterbox. Wish I could send him a Daakiya postcard, feature my own photographs — how he would save them his journal, perhaps I would send him a spare one to revert.

Ques. – Tell us about your experience of getting the first order.

Athira: When we first put our pictures on Instagram, it was just a story stating that these are for sale, and asking our followers what they wanted in the future. There wasn’t one person whose order came in first. There were many people who texted us simultaneously. We received quite a lot of positive feedback and gratitude for the venture. We did not have that first order but we did have a first batch that went out, which made us realize that we had really achieved something here. It was a weekend and 20 orders came in 2 days. We were so happy!

Shilpi: I had planned to start the first initiative of Daakiya for about a year, but our first batch of prints was out-of-stock in a matter of three days. Everyone wrote beautiful messages to their loved ones. Writing the messages and packing them in the brown envelopes has been an overwhelming experience. With every message, it is amazingly different how everyone interprets and relates to the photographs in their messages.

Avidha: By the time Daakiya was formed, I was out of college so I missed the part when we were delivering postcards ourselves. I missed that initial reaction on our customers’ faces. For me, the first time I saw that was in Artsy café in Calcutta.

It’s a café that I really like, and additionally, it supports artists. The owner of the café called me up. I shared a photo of all of us and the story of starting Daakiya. She was overjoyed and complimented our potential for photography, telling us to pursue it further. This outlet helped us sell postcards and I remember when we sold postcards there, it was a really nice time! 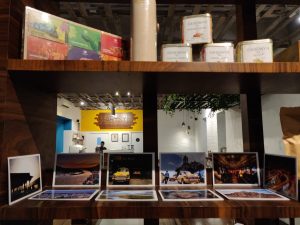 Ques. – Starting a venture while you are in college is incredible. So what is your advice to people who want to start a business or something like this?

Sakshi: All I will say is go ahead with your idea! I remember people telling us “You should do this, we are with you!”. A college is a place where you can experiment without a lot of hesitations.

Avidha: I agree with Sakshi. If you have an idea then do it at the earliest, when you are in college. From personal experience, life gets weird after college.

Sakshi: I think in college, support from your peers overrides any unsolicited opinion that comes your way.

Athira: I remember some graduates came up to me and told me that they heard about Daakiya. They told me about the ideas they had in college but never worked on, and hence appreciated us taking our idea ahead. So, if you have an idea, take it forward even if you don’t have anyone with you. Just do it! It will turn out to be a wonderful experience.

Avidha: Even if it doesn’t turn out to be the way you imagined it to be. The effort to pursue it is worth it. It really brings joy! 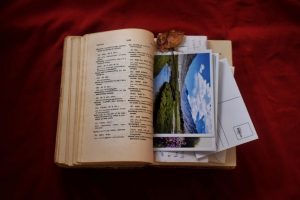 So if you have an idea then take this chance and start your venture. If you just want to send something to your loved ones, then what is better than Daakiya’s postcard! Send your dear ones a personal note made with passion, warmth and love.