The debate regarding direct-to-digital release has witnessed a massive rift in the film industry. The ongoing COVID-19 lockdown has impacted several industries across the
world—however, one of the most hit industries in the film and television industries.

Several producers have decided to release their film directly on the OTT platforms rather than theatres; after all, theatres are not going to open anytime soon. This particular decision has been taken owing to the monetary and logistical factors. However, the “OTT vs. theaters debate” has just begun and is not about to end in the unforeseen future.

WHAT IS AN OTT PLATFORM?

An over-the-top (OTT) media service is a streaming media service that directly offers viewers through broadcast, internet bypassing cable, and satellite television platforms. These are the traditional platforms for distributions of such contents. The emergence of OTT platforms has resulted in a disruption in the entertainment sector. It is being thrust upon by the rise in the evolution of smartphones, the standard of living, changing preferences of the audience, and above all, the ubiquitous and affordable Internet connectivity coupled with increasing penetration in rural areas.

“Content is the king” phrase is truly living up to its real sense in recent times. It is personalized and provides the opportunity for wider focused distribution. According to a recent report by the Boston Consulting Group, it predicted that the OTT divisions in India are currently secured $0.5 billion, and is expected to grow around $5 billion by 2023. Affordability and convenience are the key factors that have propelled the OTT revolution in India.

Various multiplex chain owners have openly criticized this move by the producers. India’s largest multiplex chain, INOX, had even released a statement regarding the same. They called out on the film industry of not standing by their partners in times of need. They even threatened about ‘retributive measures’ that will be taken in the future. This was followed by Producers Guild India as well making a statement contradictory to theirs. 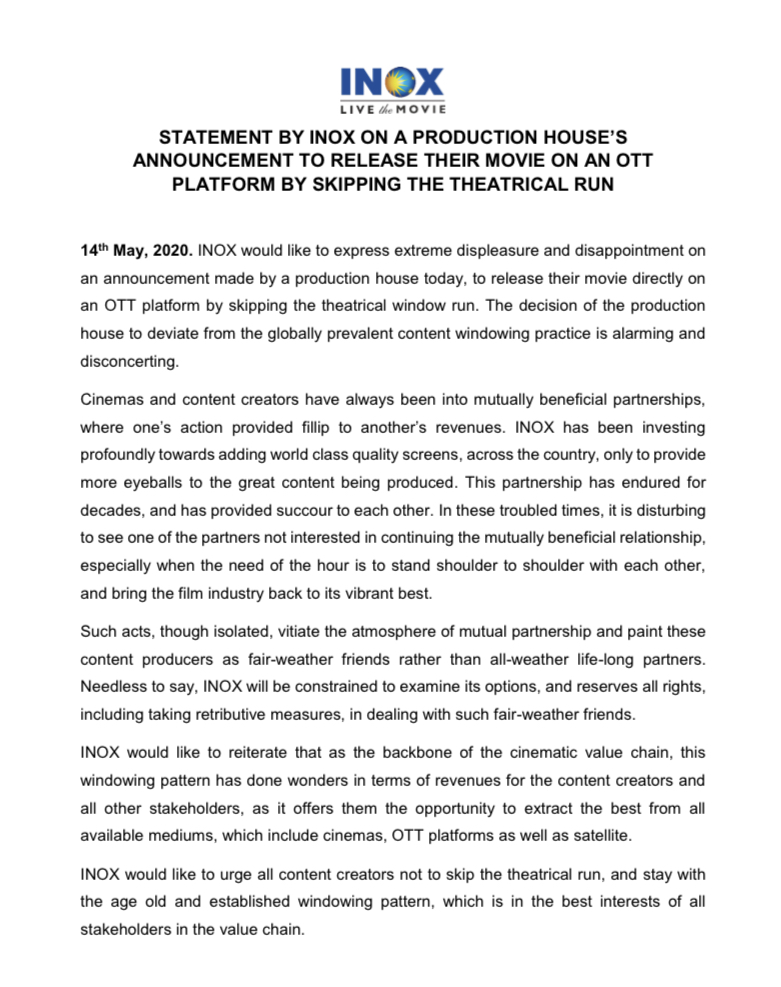 Siddharth Jain from the INOX chain of cinemas was surprised by the movie industry’s producer friends’ move. Cinemas and exhibition share a century-old relationship. So, the least they were expecting from their friends was that they all at least ponder over the situation before making any announcements. No one from the other side was consulted about the same, and suddenly a line of cinemas announced their release on Amazon Prime, Zee5, and Netflix, to name a few. Also, once the theaters open, one cannot expect the viewers to pay to watch an old film that is already out in the market.

As a result, even PVR urged the producers not to release their films until theaters do not reopen. Kamal Gianchandani, CEO of PVR Pictures, in a conversation with HuffPost India, stated that they are disappointed with Gulabo Sitabo being directly released on the OTT platform. Tamil Nadu Theatre and Multiplex Owners’ Association had also expressed its displeasure when it was announced that Suriya and his company 2D Entertainment Ponmagal Vandhal, would be directly released on OTT platforms. They even threatened to ban their films in the future. Nevertheless, on 29th May 2020, the movie was released on Amazon Prime. Eastern India Motion Pictures Association (EIMPA) had written to the government regarding their apprehension on films getting released on OTTs directly.

The theatre owners do have a point. Huge investments have been made on the infrastructure. apart from the revenues, such exhibitions do generate huge employment opportunities. Currently, around 2 lakh people are earning their bread and butter from this industry. So, if this trend continues, there will be a cause of worry.

Rs, 10-15,000 crore of yearly revenues, are generated from the box-office. Due to the lockdown, this quarter of that business is already lost. Now with the producers skipping, the theatrical release would make the matter worse. It is estimated that with the release of Gulabo Sitabo and Shakuntala Devi, there will be an additional loss of Rs 100-125 crore. Leaving aside what has been done, one will realize that straight-to-OTT is not a wise decision at all. Revenues from other avenues such as TV satellite rights are also lost. Renowned filmmakers like Shoojit Sircar believe this is a time to experiment with other platforms for releasing the films. It is because the theatres would not be opening anytime soon. The rising cases in the country have forced the state governments to put the reopening of the theatres at last in the priority list. The business of a film can only be taken into consideration by the pan-India box office. So rather than incurring losses by shelving the movie for so long, it is better to release them on OTT to curb the losses. But it is a short-term phenomenon.

However, it does not mean that the films give to the OTT are at a loss. It will allow the filmmakers to cover the damage and earn a premium so that they can begin working on other films; and Amazon Prime, Zee5, and Netflix having that kind of money to buy the rights. This way, it is a win-win situation for both of them.

Once the theatres open, people would be back watching their favorite actors on the big screen. Also, several films will be lined up for the screening. According to an analysis, approximately six films will be lined up every Friday for the release. So, it is better this way to cut the competition and the losses. Theatres are the best medium to watch a film. Also, it is the best way to pay one’s respect and love for the genius and the hard work of the filmmakers. 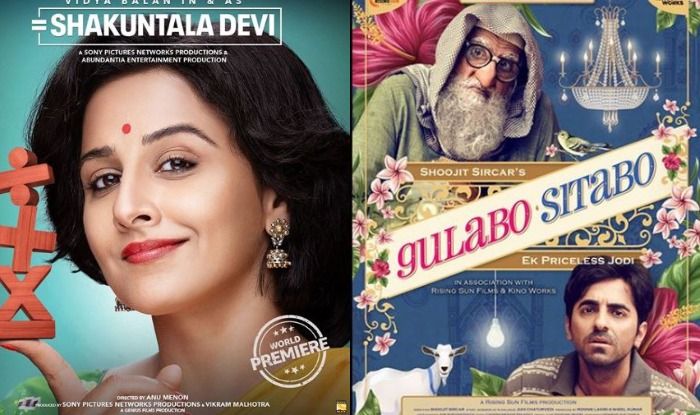 CHALLENGE TO THE THEATERS

According to the 2020 FICCI-EY report of 2020, about 50 low budget films were released directly on OTT in India in 2019. OTT guarantees a broader audience for small films with less saleable names. It cuts costs on printing and advertising. A theatrical release is a costly affair for them as distributors do not show much of an interest. Thus, it acts as a saviour for smaller films, but it cannot replace the exhibition industry.

So, the digital release of feature films is not a new trend. There has been a 100% increase in the streaming subscription revenues last year. Besides offering live entertainment, several OTT players are creating noteworthy web series and film that has managed to capture the eyeballs. It has created a tension that the filmmakers will lose out on the theatrical experience. Video streaming platforms have certainly made experiencing movies convenient, affordable, and available ‘on the go,’ especially for those who prefer binge-watching.

So, although the theatres still draw an enormous footfall, the streaming platforms’ presence cannot be made palpable. A digital release is a different game, and every film has a unique strategy to stand out. Nevertheless, the exhibition model will endure this challenge a well. Earlier as well, there were challenges such as VCRs, VCD, and DVDs. Now the streaming platforms have come up. During every trial, people though that the theatres would perish. But all the problems have been done and dusted very time. It too shall pass

They are watching movies by going out of the house, and using it as an opportunity to socialize is embedded in India’s social fabric. Movies, coupled with dinner, is escapism for the next-gen from their daily routine. Although streaming has made the movie-watching experience cheap and comfortable, the fun to go out of the house using this occasion cannot be replaced.

Currently, both the mediums are holding on to their exclusive formats and the USP attached to it. Both of them serve almost the same type of content, but the purpose and consumer variables are different. People might look up to the theatre experience for 3D animation or much-awaited-films. While on the other hand, the audience will rely on the OTT platforms more On-The-Go with more like podcasts, exclusive interest content, history documentaries, interviews, or web series. It is more likely that OTT has been impacted by the ongoing TV viewership rather than a theatrical experience.

The co-existence of both theatres and OTT platforms in the long -run is something that we all can foresee in the future. It is merely because of the relevance these two platforms hold in terms of viewers and the content. While people watch OTTs on weekdays, on the other hand, people watch movies over the weekend. However, the technological revolution will redefine theatre for a type of content such as genre movies for sure.

The current audiences are not willing to shy to shed an extra penny to seek a completely transformative experience for fresh, relatable, and engaging content. Thus, exaggerating either of them is incorrect.

Nevertheless, it is safe to assume that customers today have a platter full of options and the freedom to choose any of them as per their interest. So, it is up to the various mediums to adapt to the changing scenario.