The Caged Bird and the shackled flight of freedom

On April 24th, 2021 with the ongoing devastating 2nd wave, which has brought a “Tsunami” of covid cases, Twitter blocked 52 tweets that criticized the government’s handling of the covid-19 surge, upon government orders. The central government is trying to censor social media and tighten its authoritative grip over freedom of speech and expression and the fundamental right to information.

Social media has become a vital lifeline for many in India. Hundreds and thousands of people have turned to social media platforms like Instagram, Twitter, Facebook to find hospital beds, oxygen, and Covid-19 medication for their loved ones.

The condition of India is devastating and the citizens with the help of these platforms are standing up to what the government should. People are dying not of Covid-19 but the lack of treatment for it. The heartbreaking scenes at crematoriums, hospitals are a shocker for the globe.

One person dies of covid-19 every 4 minutes in India. Covid-19 numbers are escalating, reflected in the record-breaking daily new cases and the unparalleled deaths due to the virus. According to medical experts, India’s actual Covid-19 cases and death numbers maybe 5 – 10 times greater than reported. From April 15th to April 24th alone, the need for medical oxygen rose to 67%. The whole country is running out of oxygen. 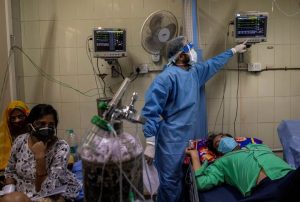 On April 25th, the Central Government confirmed that it ordered Facebook, Instagram, and Twitter to dam or block nearly one hundred posts related to Covid-19 calling them as “inflammatory” or aimed to “create panic.” Among the posts that the authorities found “inflammatory” had been visuals of cremations. The Indian Publication Hindustan Times quoted an anonymous government official saying “Covid related posts that showed photos of cremations that were incendiary, inflammatory messages that could incite the public and lead to assaults on healthcare personnel are among those that have been blocked.”

Twitter has thus admitted that it has complied with the orders of the government.

On Wednesday evening, 28th April, Facebook temporarily prevented its users around the world from searching for content using the hashtag “ResignModi”. Access to the hashtag and related content was restored a few hours later after user indignation broke out across various social media platforms.

The Central Government’s orders to block such posts are constructed upon the Section 69(A) of India’s Information Technology Act, which allows the government to block public access to the information that is available online.

The situation raises a few questions – Citizens across the nation are struggling to find hospital beds, vaccines, medicines and oxygen. It has been a year since the pandemic. Why is India’s health infrastructure not ready yet? And Secondly, Why are the actual figures or real figures of Covid-19 cases and death toll being hidden?

It is ironic how all the Social media platforms are acting as the pivot for Covid-19 related resource leads, for the entire country. They are playing an essential role in amplifying resources and sharing information about their availability across different states and regions. While on the other hand, they have become victims of government censorship.

The government is trying to hide its irresponsibility and failure in the handling of the covid-19 crisis and how unprepared we were. On April 19th, The Union Home Minister claimed that if people wish to cry about the shortage of oxygen, for political reasons then he can’t stop that.  He claims that there is a narrow gap between the demand and supply graph but there is “No Shortage” of Oxygen in the country, according to the “accurate figures” that he seems to possess. Moreover, within a day or two, every place will have enough stock of Oxygen. Moreover, On Thursday, April 29th, Yogi Adityanath, the Chief Minister of the country’s largest state, Uttar Pradesh, claimed the same and said that the real issue the country is facing is “black marketeering and hoarding”. Furthermore, He stated to have instructed officials to “seize the property” of those, who are spreading rumours about the shortage of oxygen and attempting to “spoil the atmosphere.”

On Friday, 30th April, the Supreme Court warned of contempt Action against states, police against the alleged clampdown on social media. The court told the central government that there should be a transparent and free flow of information amongst the people, further adding that “we should hear voices of the citizens”.

Do read the following links –