THIS DAY IN HISTORY- 8TH APRIL

This Day in History is DUE’s daily dose of trivia for all the history buffs out there. So sit back and take a ride of all the fascinating things that happened on 8th April!

People are trapped in history and history is trapped in people, and hence, every day has been a significant one in the foibles of history. Now, let’s take a tour of “This Day in History – 8th April”.

Venus de Milo is an ancient Greek statue and one of the most famous works of ancient Greek sculpture. It was made by the sculptor Alexandros of Antioch in the 2nd century BC. It was rediscovered on 8 April 1820 by a peasant named Yorgos Kentrotas in the ancient city ruins of Milos.

Mangal Pandey was an Indian soldier and an inspirational figure for all Indians. His heroics in the mutiny against the British East India Company later laid out to become the great rebellion of 1857. He was sentenced to death and later executed on April 8th, 1857. A commemorative postage stamp with his image on it was issued by the Indian government in 1984.

On this day in 1929, Bhagat Singh and Batukeshwar Dutt threw political handouts and smoke bombs at the Delhi Central Legislative Assembly. The motive behind the act was not to cause harm but to protest the two repressive bills which were being passed in the assembly. These were the Public Safety Bill and the Trade Dispute Bill. They were successful in stopping the meeting and even surrendered themselves to the police. 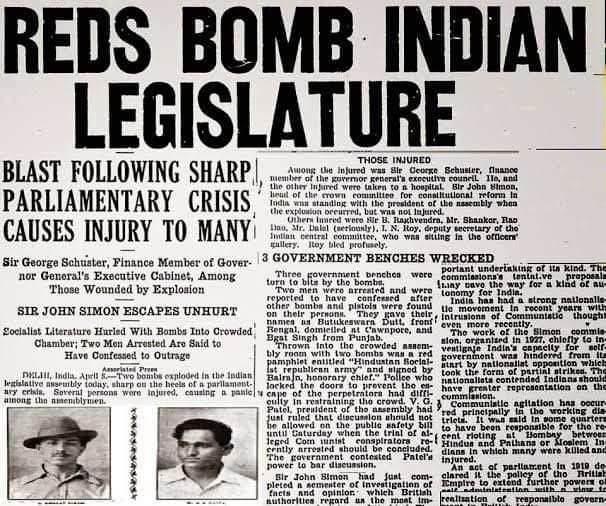 The Delhi Pact, also known as Nehru-Liaquat Pact was concluded between Jawaharlal Nehru, the prime minister of India and Liaquat Ali Khan, the prime minister of Pakistan. The pact allowed refugees of the partition to return unmolested for disposing of their properties. All forced conversions were unrecognized, abducted women were to be returned and the fact also confirmed minority rights. It was necessary since the economic relations between India and Pakistan had been deeply severed post the partition of India.

Pablo Picasso was a Spanish painter, sculptor, printmaker, ceramicist and stage designer. He was one of the greatest and most influential artists of the 20th century. He died due to heart failure at the age of 91 in Mougins, France. He is thought to have made about 50,000 artworks during his lifetime. He is popularly known as the creator of cubism.