Twitter brings something ‘distinct’ out of people; take Donald Trump for example and his bizarre string of tweets during his four-year presidency. Not on the same lines but Elon Musk has taken to some risqué Tweets (especially Twitter polls) in the last couple of years.

On November 7, he put across a Twitter poll to ask his 63.1 million followers if he should sell 10% of his Tesla stock. Some 58% agreed while the remaining voted ‘No’. 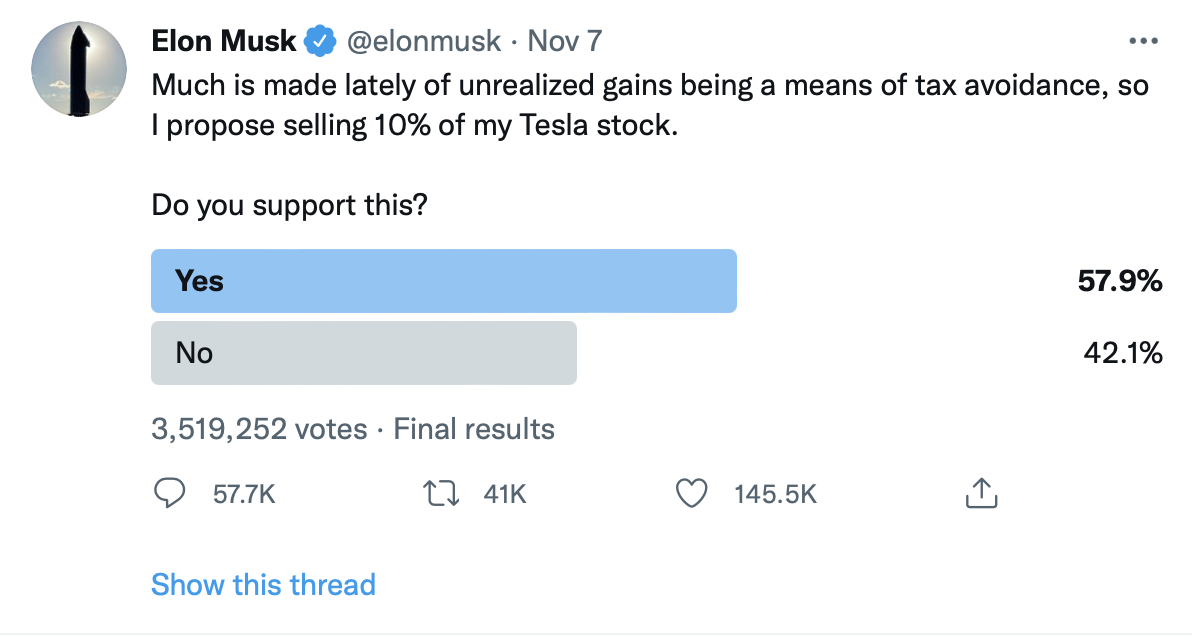 I have a bunch of options that are expiring early next year, so a huge block of options will sell in Q4 — because I have to or they’ll expire.

Musk owns 22,862,050 shares at 6.24 dollars which were rewarded to him in 2012 and expire on August 13 2022. Many other current and former Tesla board members offloaded their stocks worth millions of dollars last month on October 28.

Regardless of the results of the poll, Musk will have to let go of his shares to pay off his tax bill of over 15 billion dollars. Currently, Musk doesn’t take a ‘salary’ and avoids income tax. But if he were to sell his options (which nonetheless expire in August 2022), he’ll need to pay an income tax on the gain.

CNBC reported more on this 15 billion dollar tax break up:

Since the options are taxed as an employee benefit or compensation, they will be taxed at top ordinary income levels, or 37% plus the 3.8% net investment tax. He will also have to pay the 13.3% top tax rate in California since the options were granted and mostly earned while he was a California tax resident. Combined, the state and federal tax rates will be 54.1%. So the total tax bill on his options, at the current price, would be $15 billion.

Due to the ‘open to everyone’ Twitter poll, the Tesla stock dropped twice in two days. Musk has now lost 50 billion dollars this week and it’s only Wednesday! The stock dip is reported as the biggest stock (two-day) decline in the history of the Bloomberg Billionaires Index.

The poll might not be the only instigator though, it was revealed that Musk’s brother Kimball sold his shares and in a report brought out by Michael Burry on Tuesday suggested that Musk might want to sell his stock options to cover his personal debt and for altruistic tax reasons.